Technical – ATSB Report – “QF32 – The story behind the story”

My book “QF32” was published in July 2012, about one year before the ATSB published its report into QF32.   Because of this mismatch in time, I was not permitted to publish information discovered by the ATSB that was not already available in the public domain.  Information I included in the “Stub Pipe” chapter was therefore limited only to my knowledge and best guesses.

I have just become aware of a video of an ATSB presentation delivered in February 2016, well after the ATSB report was released.   This presentation details exactly what happened in the chain of events that led to the engine failure.

I recommend this fifty minute presentation to people who want to know the  exact cause for the uncontained engine failure.

Fortunately, the ATSB presentation agrees with and validates all I wrote in “QF32”.  The report also included things I did not know.  The investigator said the three primary fragments of the IP disk exited the engine at a speed of 880 metres per second (880 * 1.98 = 1742 knots or M2.63),  2.63 times the speed of Sound.

Of the three fragments of the Intermediate Pressure Turbine (IPT) disk that left the engine at Mach 2.6, only two impacted the fuselage.  As they left the engine, these two pieces severed both engine thrust links (that transmits thrust to the engine strut), bent the $1m engine strut, then cut and energised hundreds of sub-pieces of shrapnel that in turn damaged other parts of the aircraft.

The ATSB  does not blame people or organisations.  It simply finds causes so that the industry can learn and implement lessons to prevent recurrences.    This philosophy has great application for resilience in

Seven years after QF32, I still hold my greatest respect for Airbus, the A380, my airline and especially Rolls-Royce.  I visited the Rolls-Royce production plant in Derby, UK just two weeks before its Trent 900 engine exploded on QF32.   My confidence in Rolls-Royce has continued unabated and I hope to visit my friends at Rolls-Royce and tour their facilities again soon.

I recommend this video for the technically minded.

(My next called “Fly!” is about resilience, is now with Penguin editors and is due out on the 4th September 2018) 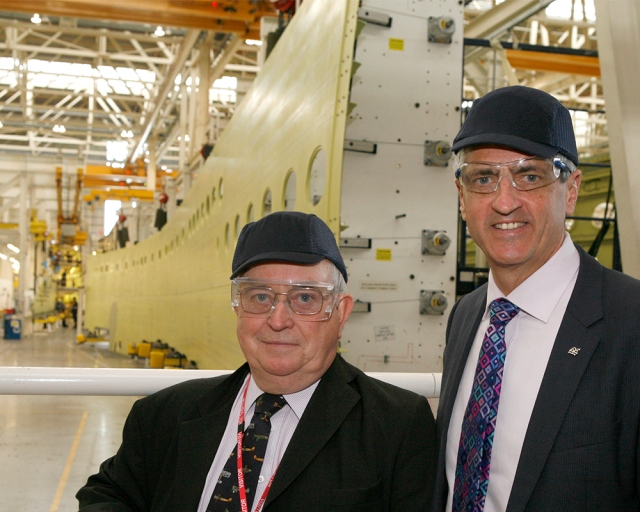 Frank Ogilvie, father of the A380, in front of the A380 wing he designed, at the Airbus Wing Factory (Photo: Airbus)