Vale one of the world’s greatest pilots 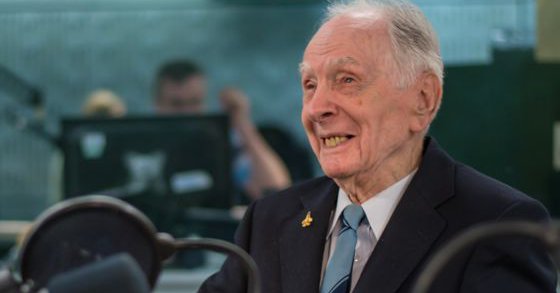 “Winkle” Brown was to British aviation what Chuck Yeager is to the USA aviation.

When you read his life story, it makes James Bond seem like a bit of a slacker (Kirsty Young)

“Winkle” Brown was the recipe for the right stuff.  He was probably the world’s greatest test pilot:

His knowledge, flying skills, experience and wisdom proved his resilience in his extraordinary high risk profession in which many perished.

At the end of the day I felt tremendous satisfaction in having beaten the odds.  This is one of the most attractive aspects of flying: taking on danger and winning.   Because you know what waits for you if you don’t win.   (“Winkle” Brown)

“Winkle” Brown gave back.  I viewed presentations he delivered in the UK up to about a year ago.  He could hold an audience spellbound for more than an hour without written notes.   He recalled aircraft designs, horsepowers, speeds and incidents of the last century as clearly as if he was still in the pilot’s seat.

be prepared for everything

He valued knowledge.  He understood his machines from the ground up.  This started with his first (500cc Norton) motorcycle.   He was a stickler for preparation before flight.   He said, “be prepared for everything”.

You will hear and read many extraordinary tributes about “Winkle” Brown over the next few months.  Here are a few:

Thank you Eric “Winkle” Brown for your contributions that made the sky safe for the billions of travellers on planet Earth.    You had the skills of Chuck Yeager with the knowledge and humility of Neil Armstrong.  Like both, you made a profound difference.  You were a teacher to many you never met.   Your legacy will endure to inspire aviators world wide.

Graham Reddin, my friend way back from our RAAF days writes at LinkedIn:

Truly one of, if not THE most remarkable aviator to have shared our profession.

As noted elsewhere, his encyclopaedic knowledge of everything aviation from the perspective of having written the history himself, and his ability to recall details of his extraordinary life with astonishing clarity right up until his passing is without equal.

The many interviews he has recorded over the years (some of which are on YouTube) are testament to his intellect and powers of observation, and make essential viewing for any aviation professional, as something we could all aspire to.