There has been a lot of recent interest in the production entitled “Air Crash Investigation S13E10 – Qantas 32: Titanic In The Sky”.     This program has been broadcast on the National Geographic channel. 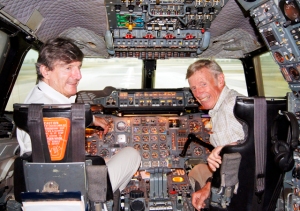 At the time of my interview, our story was planned to be the final episode (ever) in the Air Crash Investigators series.  So I was determined to use this opportunity to acknowledge my ancestors that had toiled and suffered to make aviation what it is today – perhaps the safest transportation industry in the world.  Click here to view my article “Flight – 100 Years Ago Today”

What a privilege.   What a responsibility!

My final words were intended to thank everyone who had contributed to aviation.  I wanted to acknowledge the earliest pioneers; those who had assembled in London at the Royal Aero Club Dinner on the 4th March 1914, and their descendants.

It’s a pity that my final statement (shown at the end of the program) was shortened.   I actually said:

The QF32 story – it’s not about me as the pilot in command of QF32,  the pilots, the cabin crew or even my airline.    It’s a story of resilience and team excellence where 8 teams pooled the industry’s knowledge, training, experience and worked together to survive a Black Swan Event.  It’s about aviation that for the last 110 years has shared their knowledge and experience to made aviation safer for the travelling public.

The Other Side of Air Crash Investigators

Tony Hughes is the first person to critically analyse the QF32 event and discuss the need for every person to be a PR and Brand Ambassador for their company.   Click here to view his (very popular) article:  What Air Crash Investigations Didn’t Tell You About QF32 (Airbus A380)

I  also share Tony’s respect for Jim Collins and other excellent authors on leadership, crisis management, teamwork  and decision making.  Indeed here is my past review of Jim’s book “Good to Great“.

I will attempt to answer questions that have not been analysed in the book.

Extoplasm and contrails behind an Emirates A380 at 35,000 feet (2,000 feet below us) flying east over the Indian Ocean (Photo RDC)

← Flight – 100 Years Ago Today
The Empirical Skeptic and Hacker →