I am pleased that this topic has generated much discussion in the pilot community.      Few readers understand if and why the Slingshot Effect exists which makes this topic is even more interesting.

Thanks for your question about the Slingshot Effect.

This phenomena is real and can be explained by the “Slingshot Effect”.

The newest Global Positioning Satellites are launched to take advantage of the Slingshot Effect.   These GPS satellites are launched from vessels located about 3,300 miles southwest of Long Beach and 1,400 miles south of the Hawaiian Islands.  This equatorial site allows the rockets to use the Earth’s high rotation speed as better launching point to reach orbit faster and with less fuel burnt.

Other examples of the Slingshot Effect include:

The concorde was effectively 2.3% lighter than its curb weight when flying on an easterly track at the equator and 0.5% lighter when flying west. The designers relied on this significant effect when planning payload-range performance where the route performance margins were small.

Gunnery and ballistics experts anticipate that rounds (bullets) fired to the east always fly a little higher (drop less) than rounds fired (at the same angle and nil wind) to the west.

At Mach 4, the apparent gravity of a missile changes by a whopping 5.1% / 1.5%  for easterly/westerly directions respectively.

Spacecraft take off from weather-beaten Kennedy Space Centre in Florida (28° North) and ESA in French Guiana (5° North) to harness rather than fight the earth’s rotation speed.

The Saturn V launch vehicle was designed to take advantage of the Slingshot Effect. The lunar mission payloads were kept within 800 pounds of the maximum by limiting the launch azimuths between 72° to 108°.

The Earth’s gravity as a function of latitude

The Slingshot Effect is a function of the relative speed of the aircraft about the earth’s centre. Factors to consider when calculating the effect include: acft velocity (track & ground speed), latitude and cruising level. The Earth’s changing gravity is not an input as it can be derived from the latitude.

For terrestrial users, the saving in fuel burn is shown in QF32 (page 346) for an A380 flying between Australia and the USA.    Airbus and Boeing test pilots and flight engineers anticipate and account for the Slingshot Effect when proving aircraft performance (they fly east-west racetrack patterns and correct data for variations in the local gravity).  The published airline performance tables do not take account of the Slingshot Effect.

The Slingshot Effect is also called the Eötvös effect.  It is not the Coriolis Effect.

Airlines save fuel when accounting for the Slingshot Effect at the flight planning stage.   Below is my graph showing the Slingshot Effect for an aircraft at 500 knots groundspeed.  I have produced tables for other conditions of ground speed and altitude.  Integrate the effect over the flight’s changing altitude, track, latitude and ground speed to get the overall change.  Note the the slingshot effect is greater on easterly than westerly tracks. 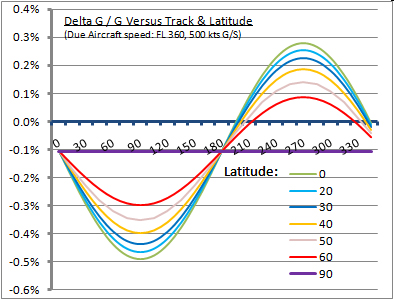 Airlines that account (in the flight plans) for the Slingshot effect save (fuel) money.   Not all flight planning systems infuse the Slingshot algorithm into their performance calculations, which is curious considering that fuel costs now comprise about 30% of airlines’ operating costs.

This post is only intended to be food for thought.

Calculations of the Slingshot Effect requires application of basic physics formulae.  Rather than spoon feeding readers with these principles, I’ll leave it to them to research mass, acceleration, gravity, oblate spheroids, weight and local weight.   The dopamine reward for success will make the effort worthwhile.  I’ll reveal more information about the Slingshot effect in my Big Jets book.

← Back Story QF32 Page 045 – Why we need to pay attention to the pre-takeoff safety briefing
Photos – Mentors, Friends & Legends (not in the QF32 book) – John Bartels →