Torched rays from the sunrise from behind us at 38,000 feet, illuminating the path in front of us over the Pacific Ocean this morning (13 January 2014).  (Photo Richard de Crespigny)

Flying IS the sport of kings.   Guiding 500 passengers and manipulating $400m worth of the highest technology through congested airspace to the other side of the planet is a privilege that few experience.

I’ve just returned from a great flight over the weekend from Sydney to Los Angeles.   I took the photo above yesterday morning as the sun rose behind my aircraft, slowly lowering the Earth’s shadow in front of us like a curtain lowers in a theatre, whilst a kaleidoscope of blue, green and orange Torch rays illuminated the higher level cirrus clouds.    It does not get more beautiful than this!

Whilst pondering this majestic Torched beauty, I reflected on how much aviation has changed the world over the last 100 years.  Many of our passengers had flown from Sydney to Los Angeles for the weekend – for a party.   One hundred years ago this trip by ship would have taken months and cost a year’s average income.   Fifty years ago this trip would have taken a week in vomit infused propellor aircraft that flew slowly at low altitudes whilst bumping along (without radar) trying to dodge thunderstorms.    Today the return flight takes just one day in comfort – flying above the clouds and weather with not even enough time for the passengers to sample all the wines and watch all the premier inflight movies!

We have become accustomed to jet travel.     The industry’s remarkable safety and on-time performance provides such confidence that few travellers appreciate the risks when flying as fast as a bullet 75% into space.    Sure, a few tech heads still marvel at how the 569 tonne A380 ever manages to lift off from the shorter Los Angeles runway (24 left) with a tailwind whilst observing the lighter jumbos using the longer (25 left) runway.   For the majority though, we expect the velvet ride that comes from the A380’s fly-by-wire “dance of the ailerons and rudders” and the quiet (72 decibel) cabin noise as the new standard.

Aviation Torches have been burning for 110 years.     The Olympic Torch of fire symbolises the theft of fire from the Greek god Zeus.  So the Torch Relay displays superiority, power and pride.   Such is the case for aviation that has connected, converged and flattened  the world last century just as dramatically as the steam train connected countries in the 1800s and the internet connects everyone today.

Pilots, engineers and entrepreneurs carried multiple aviation Torches.    Only 66 years elapsed between the first flight of the Wright Flier to the first man landing on the moon.   When one Torch Relay closes, another starts somewhere else.

What were our great Torch Relays?  What Torches are we relaying today?  And what Relays lies ahead?

This photo was taken last Saturday as we winged our way from Sydney to Los Angeles.   We approached the Californian coastline from the west, overflying Ventura and Santa Barbara.  The cockpit is setup with Autopilot 2 and “Heading” mode engaged, banking the A380 right (currently passing the heading of 035 degrees) onto our selected heading of 075 degrees to follow the coast southwards  towards Santa Monica.

The A380 normally banks at a rate of less than two degrees per second.  Our vestibular systems cannot sense roll rates below two degrees per second, so our passengers are oblivious to us turning and banking the A380 along the approach path – indeed they perceive that we are flying straight.

0809 am crossing the Californian coast north of Ventura.  This high resolution (4,000 x 3,000) photo may be expanded-printed to almost any size.   (Photo R de Crespigny)

Geoff Sheppard is flying.   Geoff has been a life long friend since our earliest days in the RAAF that stretch back to 1975.

Two pilots in the front seats, two relief pilots monitoring us from behind, steering more than 500 passengers and cabin crew back down to Earth, covered by a couple of billion dollars of insurance.

We are passing through the USA transition level where we change the three altimeters’ setting from a “STD” or “standard atmosphere” pressure setting of 1013 hectopascals (29.925 inches of mercury) to the area pressure setting of 30.13 inches of mercury.   I have already set “30.13” on my altimeter setting on my mode control panel, Geoff’s hand is rising to change his altimeter from “STD” to 30.13.   My hand is about to change the standby altimeter setting from “STD” to 30.13.

It was a team effort; Geoff was flying and I was supporting his commands, actioning checklists, and making all the radio calls.    Only operational comments passed between us, there was a level command gradient where everyone is expected to speak up if they have concerns.   There was no room for ego.  It was busy but great fun.

We offered a few passengers a visit to our cockpit at the end of the flight for a tour of the “glass cockpit” and systems.   Our  guests love experiencing “our world” – you can see it in their eyes below. 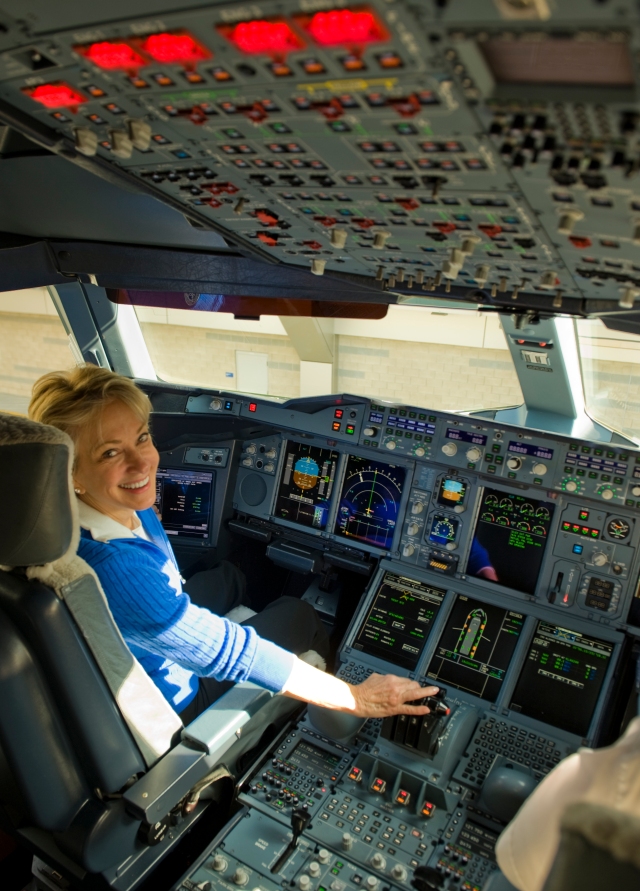 Don’t be afraid to ask to visit the flight deck after you fly with us.  It’s our privilege and pleasure to meet you and show you our “office”.

Tex joins us in the cockpit this morning on arrival after our return from Los Angeles back to Sydney. Tex is a 93 year old American former WWII fighter (P47 & P38) and bomber (B24) ace admitting only to flying well over 25 missions and having “a few thousand hours of flying experience”, all before the Comet and the advent of the jet engine and high speed and high altitude flight!    Tex marvelled at the A380s cockpit.

We’ve learned a lot in the last 110 years

Air travel has become so commonplace that the public often forgets just how much the industry as achieved in just 110 years since Wilbur and Orville Wright wheeled out their “flying bicycle” in 1903.

Few travellers comprehend the advances in jet travel that have evolved over the past 61 years since the Comet made its first commercial pressurised high speed, high altitude jet flight.   This was a multiple sector passage from London to Johannesburg (South Africa).    I interviewed Captain Phil Brentnall who was the captain on board that first flight that hopped from London Airport over the Alps to Rome then Beirut, Khartoum, Entebbe, Livingstone then Johannesburg.  60,000 spectators amassed  to welcome Phil landing at Johannesburg.    Click here to see a video about this flight

The Comet cruised at the new extraordinary height of 40,000 feet.   At this high altitude, the cold air caused the pitot heaters to fail and the fuel to freeze.  The aircraft stalled or went supersonic if not handled smoothly in the thin air.   Engine failures were common.

The 10th January 2014 marked sixty years since the third Comet I passenger jet aircraft exploded (airborne). It had just taken off and was climbing through 26,000′ over Elba (Italy).  29 passengers and 6 crew killed and all Comets were grounded shortly afterwards.

It was the last straw.   Of 19 Comet I aircraft built, 8 crashed.  Phil lost seven friends.  The Comet’s Certificate of Airworthiness was revoked.

The Comets’ accidents marked the first time that detailed aviation accident investigations were carried out. It also provided the impetus for Australia’s David Warren to invent the Black Box (flight data recorder).  (See Eve Coggan’s video about David Warren, and Eve’s interview with me) The cause of the aircraft losses was traced to sharp (square) corners in the fuselage windows and antenna mounts, that concentrated stresses into smaller areas until fractures occurred.

The Jet Age was with us and aviation would never be the same again.

The damage to the Comet’s reputation was irreparable.   The Comet IV surfaced five years later with the design flaws corrected, but by this time the “Torch” of high altitude, high speed jet travel that the Comet I had dropped, was picked up and carried to victory by Boeing with their B707 and McDonnell Douglas with their DC8.

Boeing and McDonnell Douglas can thank the Comet for paving the way for discoveries about high performance jet flight that we take for granted today.  Stall warning systems were invented, takeoff and high altitude performance refined, and the manufacturers learned to never cut square windows into aircraft fuselages.

These discoveries resulted in advancements that later became enshrined in the world’s newer “Certification” standards.  This is why the test pilots say that certification rules were “written in blood”.

I thought of “Torch Relays” as I observed  the spectacular Torched pin sharp technicolour sunrise  that morning.   A few more Torch Relays came to mind; 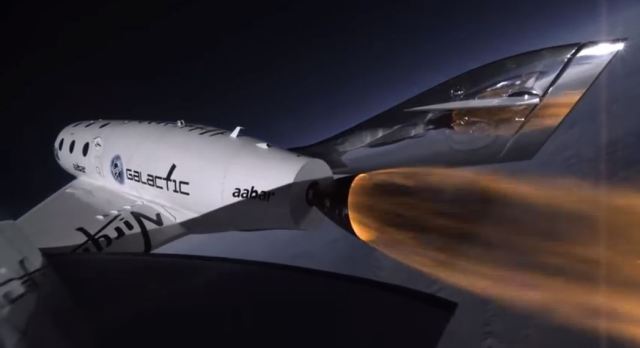 The bold will inherit the Earth.  Life is not a dress rehearsal; it is short and unpredictable.  Just like every spectacular sunrise, regard each day is a gift: seize it and treat it as though it is one of your last, as you only live it once and you cannot guarantee that there will be more. 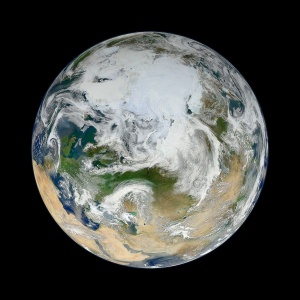 Technology waits for no-one.  When De Havilland dropped the Comet’s Torch (for commercial high speed, high altitude jet flight), Boeing and McDonnell Douglas picked it up and the rest is history.

We are currently in a technological quiet period before a storm, with phenomenal research about to deliver remarkable advances in energy, genetics, artificial intelligence, automation (mechatronics), unmanned vehicles and air travel.

Many Torches of fire, power, superiority and pride lie ahead of us, ready to be grasped and relayed.   The opportunities are boundless.  Some of the torches are our dreams that many will turn into reality.

The Torches of opportunity are lying on the ground.   Someone has to pick them up and run with them.   They’ll have to have a fierce will, intrepid spirit and a distance runner.  The Wright Brothers did it, Phil Brentnall did it, Neil Armstrong did it.   Sully Sullenberger did it.   Now it’s your turn.

You might even be able to see your Torch.  Are you ready to it pick up and run with it?